November 2014 MCLinc Newsletter
This month’s MCLinc Newsletter features employees – past and present. Two of the founding members of MCLinc, Larry Harris and Jim Shoemaker, continued to work with MCLinc until the past year when we lost Larry to death and Jim to retirement. Each of these gentlemen leaves behind a legacy of knowledge passed on to members of the MCLinc staff who worked with them over the years. Another founding member, Bob Stevenson has gone from full time to part-time employment.

We are pleased to introduce three additions to the MCLinc staff – Mark Colberg, Blake Dunaway, and Cory Hensley. We want you to know who they are and, hopefully, you will meet them at one of the functions that MCLinc sponsors. The service we provide depends on the quality of our employees and we strive to employ people who put the customer first.

In closing, I want to thank those of you who attended the 31st Annual Pig Roast at the Stephenson Farm on October 12. We had a great time despite the threat of rain. Watch for our holiday edition of the Newsletter in December.

Thanks for your support,
Barry 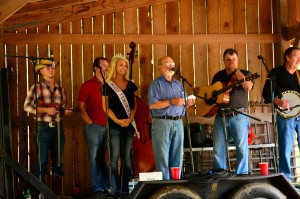 The 31st Annual Pig Roast was another great success, in spite of the threat of rain. The event was held Sunday, October 12 at the Barry and Lucy Stephenson Family Farm just east of Kingston. Attendees gathered around the Stephenson barn to enjoy great bluegrass music from the Avery Trace Band and plenty of barbeque.

Barry Stephenson,
President and CEO of MCLinc, was delighted to see many return guests and new ones. Barry’s famous Pig Roast quote is, “once invited to the Pig Roast, always invited!”

If you were able to attend we hope to
see you again next year and if not, well, we hope to see you next year as well! 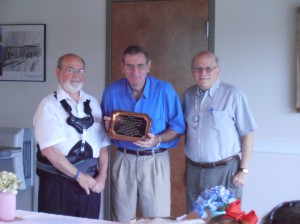 On September 4, 2014, MCLinc hosted James L. Shoemaker’s retirement party in honor of his 49 years of service at the K-25 site. Jim was a founding member of MCLinc and worked as a chemist for MCLinc from 1998 to 2014. He received his B.S. from Austin Peay State University with a double major in Chemistry and Mathematics.

Jim also completed one year of graduate studies at the University of Tennessee in Inorganic Chemistry. He has over 30 years of experience in performing hands-on work with radiological, hazardous, and/or classified materials. As a chemist, Jim has extensive operations experience, including the evaluation of new waste treatment technologies, processes, and disposal options for mixed waste. Jim has provided technical support and process problem resolution for most K-25 Site plant operations, facilities, and functions as part of his work on the K-25 site from 1965 through 2014.

Upon retirement, Jim was presented with two awards by Barry Stephenson, President and CEO of MCLinc, and by Bill Bostick, Senior Technical Scientist at MCLinc. The first award was in recognition of Jim’s near fifty years of service to the K-25 site. The other award was in recognition of Jim being a founder of MCLinc and member of their staff for 16 years. MCLinc is proud to have had James Showmaker as an employee and congratulates him on his retirement. 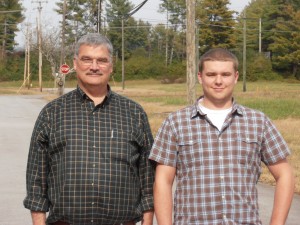 Blake Dunaway
Blake is MCLinc’s newest employee joining the Company this month. He is a native of Crossville, Tennessee and obtained a B.S. in Material Science and Engineering from the University of Tennessee, Knoxville. In December of this year, he will graduate from the Georgia Institute of Technology with his M.S. degree in Bioengineering/Materials Science and Engineering. His Master’s thesis focuses on the development of a colloidal based therapeutic delivery system using DNA aptamers. Blake has joined MCLinc’s microscopy department to work with Dr. Mark Colberg in building that department in some new areas of service and strengthening those currently offered.

Blake was born and raised in Tennessee and is excited to return home as a member of the MCLinc staff. In his free time, he enjoys playing and listening to music, hiking, and hopes to one day publish a novel. Blake says, “I’m looking forward to working on the large variety of projects offered at MCLinc; after devoting two years to the development of a single overarching project, the chance to delve into some new mysteries is a welcome change of pace.”

Dr. Mark Colberg
MCLinc welcomes Dr. Mark Colberg to our staff! Dr. Colberg is a Technical Manager for Microscopy and Project Manager at MCLinc. He has a B.S. degree in Geology with a minor in Chemistry from Auburn University; a M.S. degree in Geology from Auburn University and a Ph.D. in Geology from the University of Georgia. He has technical expertise in microscopy and chemical analyses, mineralogy, igneous and metamorphic petrology, geochemistry, structural and field geology, and thermodynamic modeling. Dr. Colberg has extensive experience in polarized light microscopy, scanning electron microscopy, electron microprobe, transmission electron microscopy, X-ray spectroscopy (EDS and WDS), X-ray diffraction, atomic absorption spectroscopy, ICP/MS and wet chemistry. Dr. Colberg applies his expertise and experience for material and waste characterization, identification of unknown materials, application of polarized light microscopy (including asbestos identification), corrosion evaluation, evaluation of nanoparticles and carbon fibers, and image analysis.

Mark lives in Claxton with his wife Marla, son Joseph, and their three dogs. Marla has a B.A. in Business (Marketing) from the University of Georgia. She is attending South College studying elementary education with 4 weeks of course work left before she starts student teaching. Joseph attends the third grade at Linden Elementary School. The family’s three dogs are Duke, Heidi, and the newest member Lucky. The family enjoys camping, fishing, rock hunting, and computer games. 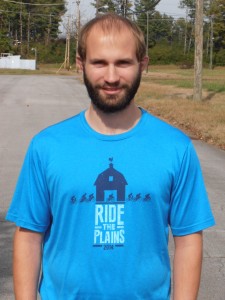 In October, MCLinc proudly welcomed Corey Hensley as one of its newest employees. Corey graduated from Maryville College in 2009 with a B.A. degree in Biology. He comes to MCLinc from Microbac Laboratories, Inc., in Maryville, where Corey gained three years of experience in Wet Chemistry analysis.

Corey is the proud father of two year old Canaan. Corey says, “Coming from a production focused lab, I enjoy the change of pace that MCLinc offers. MCLinc has the ability to focus closely on the needs of their customers and treat each, whether it is a routine or a special project, with diligence and care. I am very excited about my new position at MCLinc and eager to learn and grow with this company.”

Bob has more than 30 years of experience since obtaining his Ph.D. in geology from the University of Minnesota in 1982. He is a nationally recognized microscopist with extensive experience in a variety of microscopic ad related analytical techniques. These techniques include scanning electron, optical, and transmission electron microscopes, X-Ray fluorescence, and X-Ray Diffraction. He has expertise in the application of microscopic and X-Ray technologies to the characterization and understanding the components of airborne contaminants, wastes, and potentially contaminated soils. Bob managed the MCLinc Asbestos Laboratory group which performs routine to complex asbestos analyses. He has since passed this title to Dr. Mark Colberg who trained under Bob.

Bob returns to MCLinc on a regular basis to lend a hand with new projects and to help with instrument set-up and training. Everyone is glad to see “Dr. Bob.” He always brings a cheerful smile, a joke or two (mostly recycled ones) and a loaf or two of that delicious bread his wife Jean makes.

Larry Harris worked as a consultant for MCLinc from 1999 to 2013 when he passed away. Larry was a WWII infantry veteran who fought in the European arena and was part of the Dachau Concentration Camp liberation forces. After returning home to Brooklyn, New York, he received his B.A. in geology from Brooklyn College. Larry later moved to Knoxville, with his wife Diana, and received his M.S. from the University of Tennessee in geology and metallurgy. He was pursuing his Ph.D. when he accepted a post at the Oak Ridge National Laboratory, where he worked from 1956 until his retirement in 1990.

During his career, he published nearly 100 scientific papers, many of them on microscopy and X-ray techniques. In addition, he was an exchange scientist at Harwell Labs in the United Kingdom from 1968 to 1969, and served as adjunct assistant professor in the Geoscience Department at the University of Tennessee, Knoxville, from 1974 to 1981. Larry was a founding member of MCLinc in 1998. He served as a mentor to many over the years that he served in a consulting capacity.