This client experienced a failure of 304L stainless steel used in their manufacturing process. 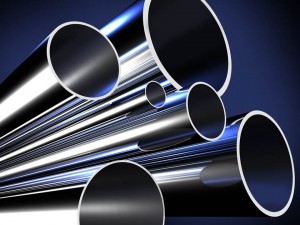 Metallurgical examination of the failure section was conducted with scanning electron microscopy (SEM) with associated energy dispersive x-ray spectroscopy (EDS). In summary, the sample nearest the failure (sample A1) showed some signs of having melted and had some precipitate and inclusions. The next two samples A2 and A3 (all within 1.5 inches of the failure) had grain boundary precipitates that were judged to be carbides and sigma phase based on their morphologies and the observation that these areas were higher in chromium than the interiors of the grains. The fourth sample A4 (about 4 inches from the failure) did not have any observable grain boundary precipitates. The chemical compositions of the inside and outside surfaces of the samples were altered to a maximum depth of 50 microns (0.002 inches). There was no selective grain boundary penetration that is often noted in metal corrosion.

These observations indicate that the type 304L stainless steel was not corroded significantly and that grain boundary precipitates were not noted beyond about 2 inches from the tear. Thus a patch welded on the remaining vessel to cover the hole from which the test piece was removed should only include material suitable for continued service. The failure of this portion of the vessel would appear to be due to localized over-heating in the vicinity of the hole. The surface of the small hole in the test sample should be examined before more details of the failure mechanism are postulated.

There is information that is of use in considering the application. The service temperature of this alloy is close to operating temperatures. The ASME Boiler and Pressure Code gives design stresses of 12.3 kpsi at 1100°F and 4.8 kpsi for 1300°F. When forming a cylinder of 60 inches in diameter from 3/8 inch thick plate, the outer fibers of the material will have a residual stress of about 50,000 psi which will be relieved some by welding the fins and the remaining stress will gradually relax during service. The service pressurization of 14 psi will cause a surface stress of about 11 kpsi. The apparatus is likely more complex and higher stresses may be developed due to restricted movement during thermal cycling. These stresses may not cause failure directly, but residual stresses will promote the formation of carbides and sigma phase.

When the system temperature is over 1000°F, sigma phase, carbides, and hydrogen are not embrittling to type 304L stainless steel, but they may present ductility problems when the system is cooled. The amount of sigma phase and carbides formed increases with increasing service temperature. Chromium is present in stainless steels and Inconels primarily to protect these alloys from sulfur embrittlment. Sulfur is very embrittling to iron at temperature above 1000°F, but chromium sulfide is stable to 2450°F. The most common embrittling mechanism of stainless steel in environments containing sulfur is for the sulfur to diffuse along the grain boundaries. The boundaries may be depleted in chromium due to the formation of carbide precipitates and/or sigma phase. The formation of carbides, the formation of sigma, and the diffusion of sulfur along the steel grain boundaries are all enhanced by increasing temperature; hence, operating temperature is the most important parameter in this system.

The investigation provided clarity of the cause of failure, and thus indicates the required modifications to prevent future incidents.